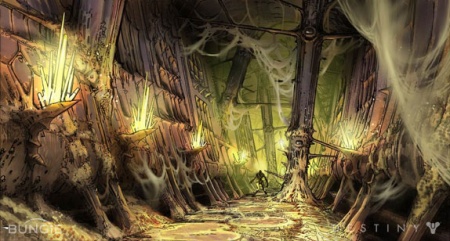 The Hive are one of the enemy races in Destiny which the Guardians must face off against.

The Hive have been called "space zombies". Little is known about their origins and culture, though it has been confirmed that they reside on the Moon. They were shown to reside in The Hellmouth in the Moon Trailer. [1] Also, there is concept art of abandoned spaceships.

Additionally, it is implied during the Moon trailer that the Hive were at least partially responsible for the Collapse.

Their appearance is of a zombie-like being with ancient armor crusted onto their frame, meant to create a sense of "undead royalty". Some types such as the Knight are distinguished by having three eyes, while others are seen with different head structures or the use of garments. Still yet, some members of the Hive are pierced by thick stakes with a ring at one end. The aesthetic differences are so-far unexplained.

Claws, large swords, and so-far unidentified projectile weapons are the tools used by the Hive.[2]

Hive themes include mystery, darkness, evil, strength and militarism, all of which are shared by their architecture, as seen with The Hellmouth.[3]

Thralls are exactly what their name implies. They are the lowest class of Hive, the workhorses if you would, and have only their claws as weapons. 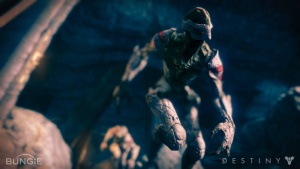 The slightly more powerful soldier than the Acolyte. They wield energy weapons that act and appear like grenade launchers.

The elite soldiers of the Hive, Knights they wield a large, broad sword and A rocket launcher like energy weapon. 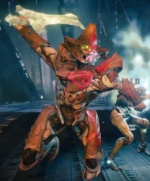 Wizards possess the ability to cast magical attacks, and are higher on the Hive chain of command than Knights and Thralls. 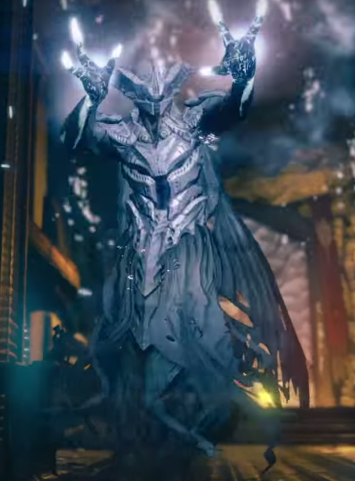 The Hive and Cabal clash on several occasions throughout the game, in the Taken King DLC, The cabal legion known as the Sky Burners assaulted Oryx's (the hive king) Dreadnaught and are attempting to wage a war on the Hive. There are also mentions in the grimoire cards that Oryx has seen the Cabal before, and that the Cabal may be running from him.

The Hive and the Fallen are enemies. Throughout the early game, they are seen fighting in multiple areas. First in the Cosmodrome in Old Russia and then on the moon, clearly these two factions are fighting one another.

The hive and Vex go back way before even the start of humanity in the game, Crota first encountered the Vex when his Aunt, Savathūn, Tricked him into opening a gateway for them to enter Oryx's throne world. The two factions then waged war for millennia. They also met once again when The Taken assaulted the vault of glass, potentially destroying the Vex before the Guardian stopped them.

The Taken are allied with the Hive as they both have the same master: Oryx, The Taken King.